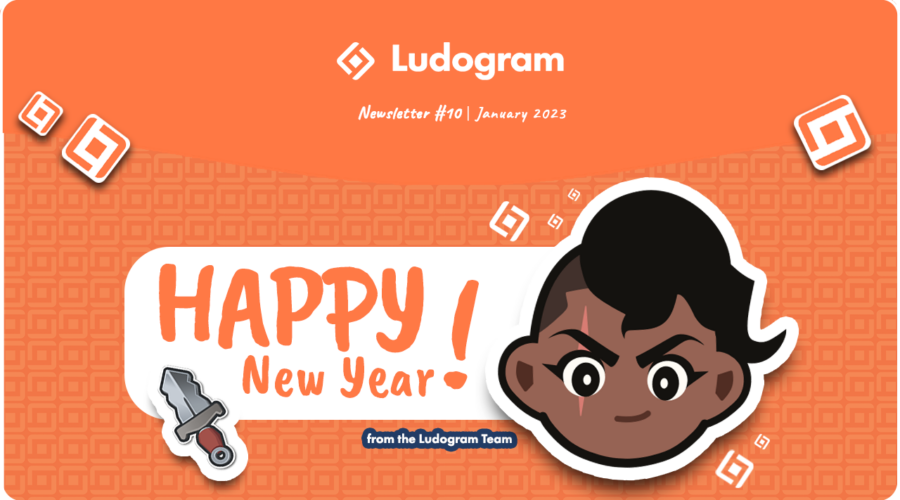 From 2022 to 2023, it was a great adventure for the studio and the team! The ups and downs have made us what we are today… And we’re proud of it!

Together, we are on the road to 2023, with even more surprising stories to tell you!

Happy Holidays!
from the Ludogram’s team

What not to miss: Live Twitch with Ishtar Games

We were on a live Twitch with Ishtar Games, our publisher for “Worlds of Aria”! It was the opportunity to showcase new scenes and to answer a few questions. Dice have been rolled, choices have been made and chaos happened…

Did you know? World of Aria’s new Discord server

Did you miss the info? “Worlds of Aria” has a #Discordserver! Join the community and pick your role… Pitiless Warrior, Mighty Mage, Greedy Merchant or Wicked Witch? In the “Worlds of Aria” you can become whoever you want…

We are on TikTok to share funny videos and useful facts with you! Chloé, our Marketing Manager, has fun with it! So, follow us, comment & enjoy our videos ! More content is coming…Join our Tik Tok now! 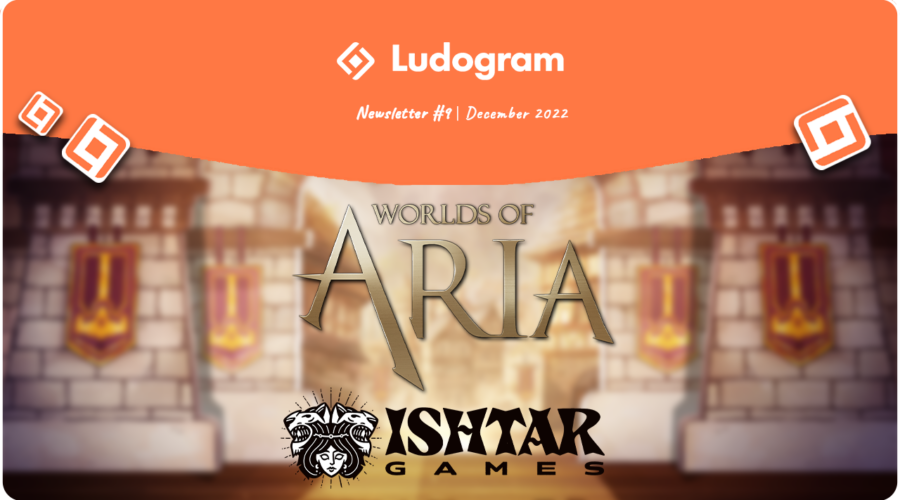 Dev Diary #9 – Ishtar Games teams up with Ludogram, for the Worlds of Aria!

Today’s focus: Ludogram teams up with Ishtar Games for Worlds of Aria!

We are announcing our collaboration with Ishtar Games! Isthar Games is now joining the Worlds of Aria adventure by becoming our publisher.

We have been developing Worlds of Aria since 2021. We were open to the possibility of being supported by a publisher. And here we are: Ishtar Games will become the publisher of Worlds of Aria!

How will Ishtar contribute to the game?

The adventure has just begin and more surprises are coming! Keep in touch to know everything about the future of the Worlds of Aria!

What not to miss: New Steam page for the Worlds of Aria

It’s finally here! A new Steam page for the Worlds of Aria showed up… More information on features, new description, GIF…. And you still can wishlist the game! What do you think?

Did you know? Shakespeare’s language!

It’s time to talk to everyone in English! As GOR lovers, we want to conquer new players’ hearts… internationally! We’re counting on you to share your impatience to play Worlds of Aria!

A new Discord server “Worlds of Aria” opens! Get ready to know everything about the game: production information, playtest sessions, important announcements, discussion with the Ludogram and Ishtar Games team…  Join our community now! 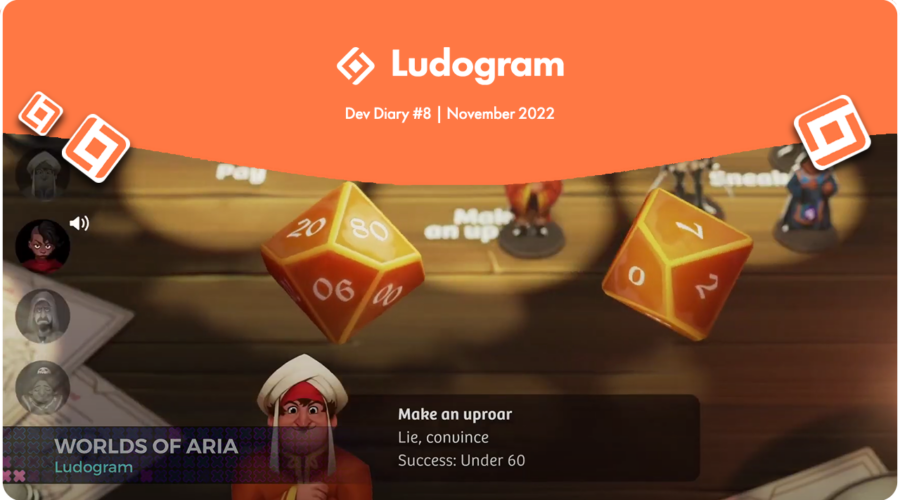 Dev Diary #8 – Worlds of Aria’s heroes at the Indie X!

Front-page: The Worlds of Aria finalist at the Indie X!

The Worlds of Aria’s heroes took advantage of the Indie X to introduce themselves to a new audience!  On November 4th, we showcased Worlds of Aria at the Indie X! Chloé, Marketing Manager at Ludogram, pitched the game as she played the new demo with the Indie X streamer. Tips, gameplay, artistic direction, all subjects have been discussed to seduce a new anglophone audience! Will we win our first prize for the Worlds of Aria?

See you on November 17 for the results announcement on the channel https://www.twitch.tv/rubberchickentv. Stay tuned!

We collected more than 1,000 additional wishlists for the Worlds of Aria in 15 days! Thanks to you ❤️ There are now more than 4000 wishlists on Steam! The adventure is just beginning, so feel free to share the link of the Steam page with your entourage!

Worlds of Aria at the Salon du jeu !

From November 26 to 27, we will be at the Salon du jeu, in Kremlin Bicêtre! Special event board games, video games and role-playing games… How could our heroes of the Worlds of Aria could missed it? This is a new opportunity for you to test the demo of the game!

Renovation works on our Steam page! We created our franchise page, no need to search our productions on the whole site! Click on the “Follow” button so you won’t miss our next productions… What do you think? 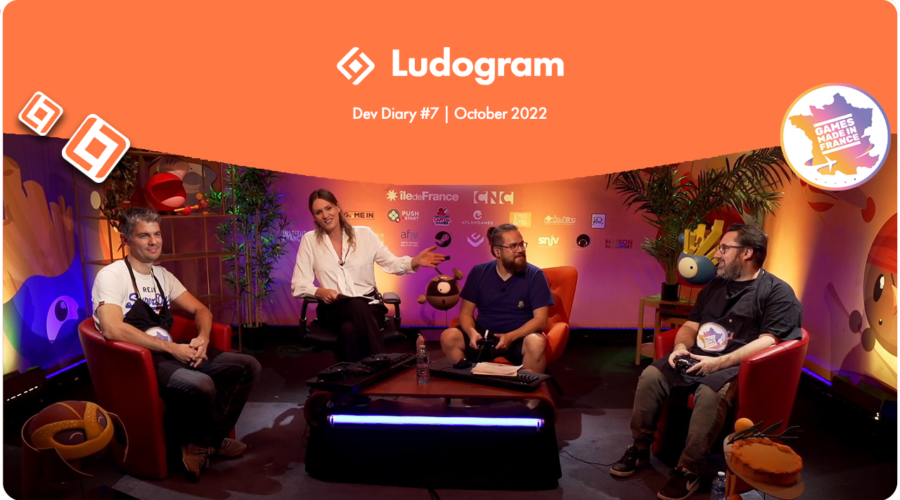 Dev Diary #7 – Games Made in France and first playtests!

Today’s focus: Throwback to Games Made in France!

Sunday, September 25, Edouard Gaudel, CEO of Ludogram, was on Twitch for the Games Made in France event! Alongside the creators mistermv, Damdam and FibreTigre, they have become the heroes of the Worlds of Aria, as they played the new demo! The team took the opportunity to unveil new features on the video game: atmospheres, 3D characters, dice rolling features, etc.

Good news for the team ❤️

Worlds of Aria at the Virtual Calais!

We were at Virtual Calais from October 1st to 2nd! We were able to have the demo of Worlds of Aria tested publicly for the first time… in a setting created especially for the occasion! Player feedback is valuable for production!

Games Made in France has featured Worlds of Aria on Steam! We count no less than 400 wishlists for the Worlds of Aria, on the day of September 25! Firebird is not outdone, collecting 588 wishlists!

We welcomed our first playtesters for Worlds of Aria! The first playtest sessions continue and your feedback is carefully studied! We have already collected more than 100 responses… But, the planning of the playtests is still in progress! So, if you want to play a game before its release and participate in the development? Try your luck!

Fill out the form 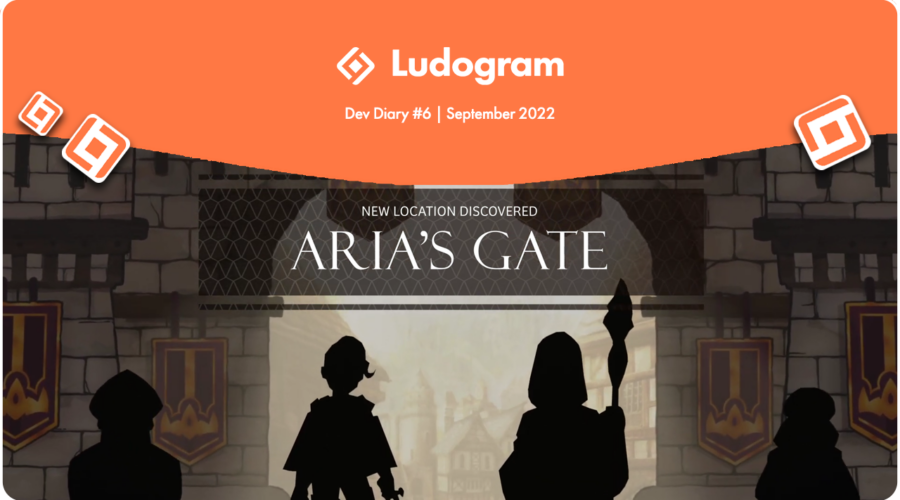 Conquer new player’s heart! Did you miss the information on our social networks? The gameplay trailer of the Worlds of Aria is available on YouTube!

Logo update, subtitle translation, English dubbing… The team was on the starting blocks to prepare the trailer as soon as possible for our English players… You can now spread the word of Game of Roles and gather as many heroes as possible in the Worlds of Aria!

Aria’s universe is ready to conquer the world, and you?

Ludogram was at the Gamescom! The playable demo of the Worlds of Aria was a hit with the visitors. In addition to two streams on Twitch, the numbers cheer the team! Record this week, we count 480 additional wishlists for Worlds of Aria and 692 for Firebird!

While we were in the middle of a demonstration on our stand at the Gamescom, we were surprised to discover Firebird on Twitch! Mynthos and Mistermv have played Mariska during their livestream on Twitch, dubbing some parts themselves and choosing their next destination…

In Firebird, Mariska and Vassilissa brave the cold of the Far North aboard the Firebird!  It is a real truck inspired by the 4331 model of the brand ZIL, produced between 1987 and 2016!